“Found it!” Pat called out to me, waving a piece of paper over his head without taking his eyes from his computer screen. Bodhi, my big, red Golden Retriever, reached him first, all wags and smiles, and Pat reached over to scratch his ears and give him a good thump before handing the paper to me.

“Uh…this is a little more than I intended to spend,” I said, gaping at a number five times larger than even my new, doubled budget. “And I thought it was only 11 acres, not 52.”

Pat laughed. “No, that’s the property across the road,” he told me. “We’re going to use it as a reference for finding the one you’re interested in. They’re both owned by the same person.”

“Ah,” I said, pursing my lips primly. “I thought maybe you were engaging in a little up-selling. Like, ‘Hey, take a look at this! Oh, this one seems a little steep? Well, then…have I got a deal for you with this other property — at only half the price!'”

Pat smirked, a mischievous glint in his eye. “Nah,” he said, jabbing a thumb over his shoulder at a man sitting behind him. “That guy’s the used car salesman. I’m on the up-and-up.” His poor colleague glanced up from his phone call, cocking his eyebrow at the two of us laughing at him before deciding he didn’t need to know.

“Let’s go!” Pat chirped chirped to Bodhi, and we were off.

Discouraged by my explorations the day before, I’d nearly quit my quest for finding rural mountain land. Intimidated by the remoteness of the properties and unsure of how I would afford one that met my needs, I’d sent up a prayer for a sign that I was on the right track. Typically, I ask the Universe to send crows as messengers because they were few and far between in my Indianapolis neighborhood, so I could consider a sighting as reasonably significant. However, as I drove back to my Airbnb lodgings that evening, I noticed that crows were as common as country daisies.

“If we’re going to use crows as our signal,” I muttered under my breath as yet another black flash of feathers crossed the highway in front of me, “you’ll have to send a whole damned murder of them.”

Crow sightings weren’t the only sign I needed. Pat and I had tried to find the 11.6-acre parcel after our nearly vertical climb to the top of a beautiful but — from my perspective — not very usable mountain property. We’d driven up and down the road but had seen no realty signs, which I’d learned from another property owner was not uncommon out in the country. And, because the land we were looking for was undeveloped property, listed as “young pine forest,” there would be no mailbox sporting a street address, assuming the numbering proceeded as logically as one might hope — and it often didn’t. The listing for the 52-acre parcel Pat had brought with us as a reference was for a small farm owned by the same person selling the land I was interested in. We had both an address and a farmhouse with a mailbox to use as a landmark.

OK, so maybe there wasn’t a farmhouse anymore…

“Uhhh…I think this is it,” Pat said, indicating a tractor road roughly cut into the hillside across from a mailbox bearing the address of the farm across the road (where a heap of stones indicated a former farmhouse). I turned my truck onto the deeply-rutted track and parked. We decided it would be imprudent to go too far up the drive until we knew whether or not we could get back out again.

Pat and I hopped out, and I released Bodhi, who immediately galloped about, pausing to sniff before charging off down the tractor road. Pat and I kept a more sedate pace behind him, peering into the undergrowth at the top of the road bank.

“It looks like they started to cut a driveway in here,” Pat said, indicating a pile of brush next to a partially-cleared swath through the trees, about two thirds the way up the road. “Let’s start there.”

We had to move slowly at first; the brush piles from the aborted road excavation created more of a barrier than an inlet. Once we got past the initial jumble, the going got somewhat easier, and I could get a sense of the place.

There was much more biodiversity than the listing implied. Beeches and oaks and poplars and hemlocks grew among the pines. On the ground, I spotted something that looked a lot like wintergreen, although the leaf shape and coloring were unfamiliar. Pretty swirls of silver-painted, dark-green leaves grew here and there. I glanced up at something Pat was standing ankle-deep in, a vague memory tugging at me.

“Hey,” I said, pointing to the fans of evergreen ground cover. “I think I read somewhere that the stuff you’re trampling is endangered.”

Pat lifted a Teva-ed foot to look beneath it. “I dunno,” he replied, frowning. “I see it all over this area.” He turned to take in his surroundings, gingerly moving off of to one side. “And it seems pretty plentiful here.”

A large growth of the stuff blanketed the slope in a brilliant green. It was breathtaking. I added its photo to the ones I’d been taking of the other plants so I could look it up later.

As we walked the parcel, a cautious hope welled in my chest. The slope was gentle, with one or two deeply-cut washes scoring its breadth. A nearly flat ridge ran along the eastern boundary, tapering gradually down to a large level area near the bottom of the plot before it dropped off to the road. There were numerous places to put a yurt. Pat and I darted about like wide-eyed children, calling out to each other with increasing excitement. “Here!” he’d yell. “You could put a yurt here!” “Check this out!” I’d yell back, waving him over to see a sunlit opening in the trees. And so it went for the better part of an hour until we loaded Bodhi — happily exhausted from his own exploring — into the truck and drove away.

Later, in my rented room, my head spinning with exhilaration and doubt and fear and hope, I found answers:

Google returned a photo of the pretty evergreen fans that had, indeed, been listed as endangered at one time but were making a slow comeback. It was a ground cover. I gaped in disbelief as I read its common name, the hair on my arms standing at attention:

It was a whole damned mess of crowsfoot. 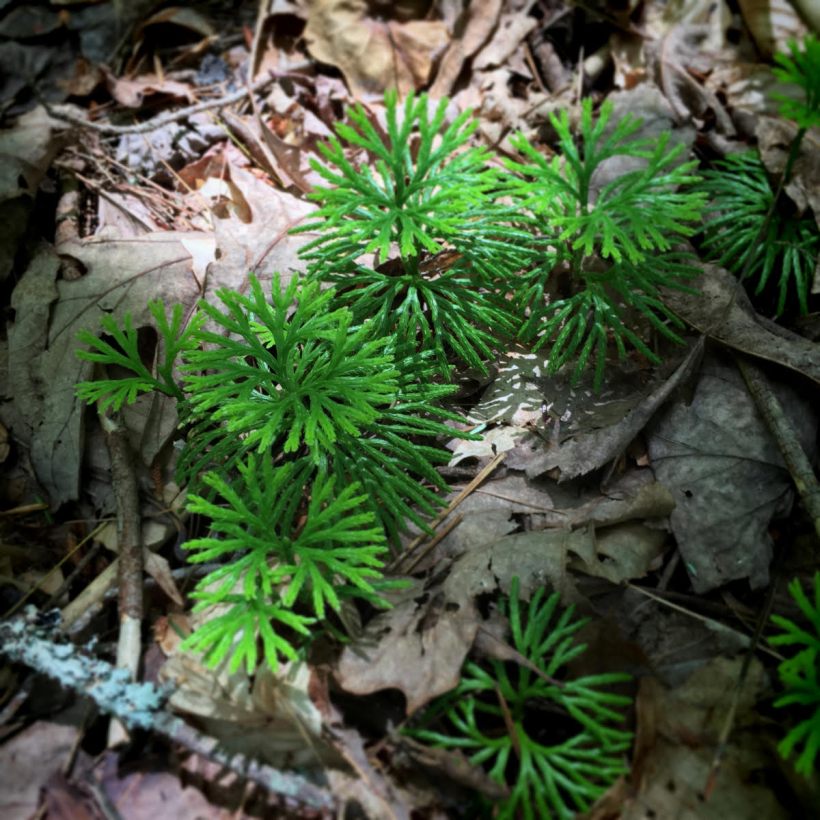 2 thoughts on “The Quest for Home, Part 3: Follow the Signs”