“I was curious about his name,” she told me, gently handing me the tin containing his ashes. (How could my big, beautiful boy be contained in something so small?)  “I know there’s a story there,” she continued. “I think I know what it is, but I’d love it if you’d tell me.”

— from a conversation with Danielle Pratt at Paws, Whiskers & Wags

I rubbed my stinging eyes and rolled my head around on my neck, working out the kinks that had formed after hours on the computer. Coyote, my old husky-shepherd mix, was sleeping on her cushion in the living room, and I was in the dining room with the big, red Golden who’d just joined our tiny pack. “Bo” was the name on his adoption papers. I gazed at the gorgeous dog lolling in a sunbeam, thinking for the hundredth time that it just didn’t fit. He glanced up from his nap and caught me looking at him. Without picking his chin up from his paws, he thumped his tail loudly on the floor, his eyes questioning.

“You’d save me a lot of trouble if you’d just tell me what your name is,” I said.

Bo thumped his tail as an answer but was no more forthcoming than that. I sighed and turned back to the slew of bookmarked baby name sites I had open on my laptop. Years ago, I’d stumbled on Sachi’s name in a baby book. A kind of play on my own name, which often translates as “joy,” my sweet little Golden girl’s name had translated as “child of joy” — a moniker that also reflected her sunny disposition. I was hoping to get lucky with the online version of a baby book and find a name whose meaning resonated with this new member of the household. I’d given up any meaning-driven kind of search about 30 minutes ago and was now combing alphabetically through the names listed on the sites, one after another. 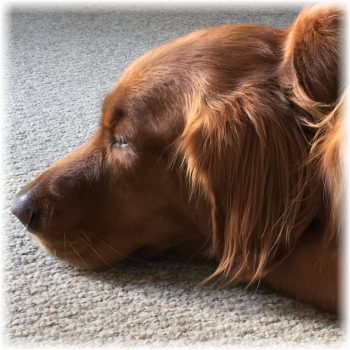 When I said nothing more, Bo closed his eyes again, and I smiled. Even at only two years old, he was a good five or six pounds heavier than my little Sachi was when she left us, with the solid build of a big, strong boy. His vibrant personality made him seem bigger-than-life, so “Bo” wouldn’t have been far off, if that was all there was to him. But…there was also this mood: profoundly still, completely at ease, yet acutely aware of his surroundings. He filled me with a curious kind of wonder. How could this Being burst with such playful vitality one instant, yet be so gentle and calm the next?

“I have much to learn from you,” I said softly, eliciting only a lazy cracking of one eyelid and a sidelong glance. “But, then, my dogs have always been my greatest teachers.”

At that moment, my cursor landed on a name in the B’s. I paused, letting the name roll around in my head before saying it out loud.

The big red dog lifted his head, yawning, then held me with a steady gaze. Yes?

“It means ‘awakened,'” I told him, excitement growing in my chest. “It’s also the first two syllables of the word bodhisattva, which is Sanskrit for ‘enlightened teacher.'”

As if in response, he wagged his tail and grinned at me, panting. Let’s try it, I thought.

“Bodhi,” I said again, decisively. And the newest member of our pack, the brother Coyote chose to share her space and her mom with, shot to his feet– wriggling with glee — to lay his head on my lap and look up at me. I like it, too, his sparkling, brown eyes seemed to say.

“And I can make the transition easier for you because I can still use ‘Bo’ for short,” I told him, scratching his silky ears for him before he dashed off to find a toy.

I texted Barb, his foster mom, about the new name, explaining my reasoning and hoping she’d like it. I didn’t have to wait long.

Thank you for putting so much thought and effort into his new name, came the fond reply as Bodhi bounded back into the room with his squeaky tennis ball and dropped it on floor at my feet. Staring at the ball with laser focus, he quickly glanced up to see if I’d noticed his invitation before boring holes into the ball again with his eyes, his body quivering with anticipation.

I laughed. Something told me that this big, glorious goofball was worth whatever effort I might make on his behalf. Because teaching me would be no small feat, even for this brilliant ray of light.

Bodhi barked. I pounced on the ball, and the game began.

“And so I named him Bodhi,” I finished my story, tears streaming freely down my face. “My dogs have always been my greatest teachers. But this one…this one was something special. He was the embodiment of joy,” I told the kind woman sitting in the chair across from me.

“Bodhi…for Bodhisattva,” she said, smiling through her own misty eyes. “I knew it would be something like that. Even as I prepared him for his final services, I could still feel that energy around him. I could feel the gift he was.”

Yes, I thought, wonder and love tugging at my broken heart. You and everyone who ever met him.

A note of thanks

If the experience in the veterinary hospital was traumatic, the experience with the crematorium they contracted with was downright horrific. Only hours after I’d left my sweet boy’s body at the hospital, waiting to be picked up for cremation, I received an automated — yes, AUTOMATED — phone call with a canned message regarding “understanding your grief after the loss of a beloved pet” and attempting to sell me additional services on a deadline. That call nearly broke me. Nearly wild with rage and anguish, I did something I rarely do: I reached out for help.

I’m deeply grateful to Jane Rose at Rose Pet Memorial Center in Indianapolis for connecting me with Carol and Danielle at Paws, Whiskers & Wags in Charlotte so that Bodhi could receive the kind of loving care in death as I tried so hard to provide him in life. These caring, devoted souls helped me rewrite the ending of the story in a way that honored us both. Thank you all — not only for what you do but also for who you are.